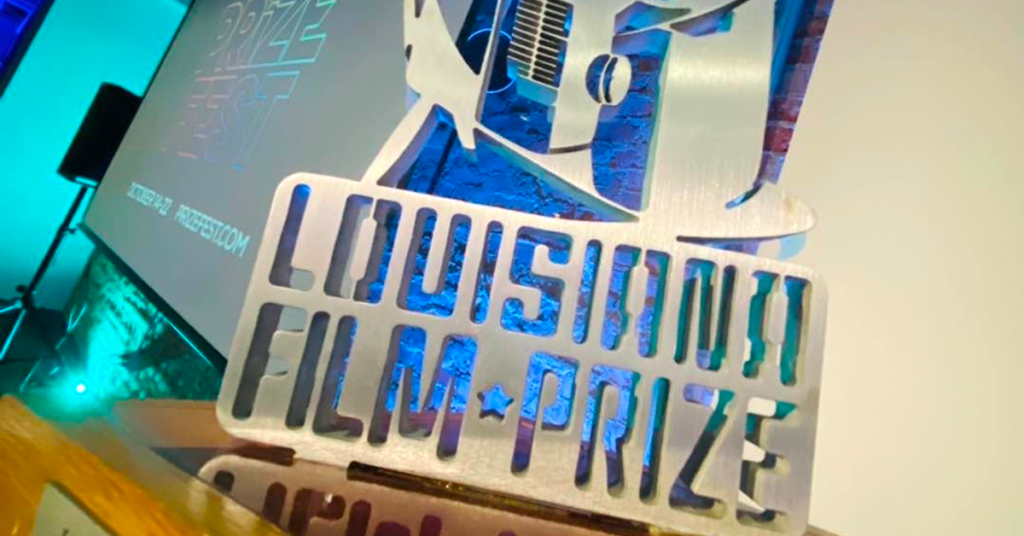 The 2022 Louisiana Film Prize announced the 20 finalists who will compete for up to $50,000 grand prize (the world’s largest cash prize for a narrative short film) during a live celebration at the Robinson Film Center on August 18. The 11th year of the award-winning Louisiana Film Prize will return to the streets of downtown Shreveport during Prize Fest 2022’s second weekend, October 20 – 22. The festival will also offer a virtual option, with viewing and voting online open to an international audience. The grand prize winner will be determined, as always, by a unique combination of voting from audience members and judges composed of film and industry veterans, tastemakers, and celebrities. The grand prize winner will be announced during a private brunch on October 23.

“This year was our largest, most diverse year for films made for the Film Prize and the Film Prize finalists are a reflection of that,” said Gregory Kallenberg, founder and executive director of the Prize Foundation. “We are so proud to show these films at Prize Fest in October and show off the amazing that was done by this national group of independent filmmakers.”

In addition to filmmakers from all over Louisiana vying for this year’s grand prize check, the class of 2022 includes filmmakers from across the state and the country including Shreveport; New Orleans; Lafayette; Austin, Texas; Los Angeles, California; and Lincoln, Nebraska. Each of those out of state filmmakers (along with many others) made the trip to Louisiana to shoot their films, so they would qualify for the Film Prize competition.

Film Prize has routinely had a strong contingent of female filmmakers, with this year’s line up once again following suit with seven women directors in the mix– Monique Morton Derouselle (“Rising Dawn”), Susan Kirton (“Credit” with her husband, Patrick), Camille Gladney (“The Cut”), Rachel Whittle (“Day of the Deb” with Matthew Garvin), Hannah Roark (“The Mover of Things”), Jaya McSharma (“Please Scream Inside Your Heart” with her husband Jacob), Marion Forbes (“Canary”), and Lorna Street Dopson (“Unicorn Poop”).

“Through Film Prize, we are building a proving ground for independent filmmakers in Northwest Louisiana,” said Kallenberg. “We invite everyone who wants to support this indie filmmaking community to come to Film Prize and help us shine a spotlight on these amazing films.”

The event has made an undeniable yearly impact on both filmmaking in Northwest Louisiana and the local economy (over the past 11 years, Film Prize has brought in over $20 million in economic impact for the area) achieved by encouraging filmmakers from around the world to journey to the area to make their films and then return to Shreveport for the film festival/competition itself.

In order to qualify for the Louisiana Film Prize, filmmakers created a short film (5-15 minutes) in which the production was shot in the state of Louisiana. The winning filmmaker, as voted by the public and a panel of film industry judges, receives a $25,000 cash prize. However, the cash prize is doubled to $50,000 if the film was shot in Caddo Parish. In addition to the grand prize, the Top 5 films will receive $1,000 cash each. Up to five films will be awarded a $3,000 reimbursable grant toward a film project for the 2023 Louisiana Film Prize Competition.

Additionally, cash awards will be given to both “Best Actor” and “Best Actress” winners. To date, the Film Prize Foundation has awarded over $500,000 in cash to independent filmmakers.

For more information about the festival and to purchase passes, visit prizefest.com.

Louisiana Film Prize 2022 Top 20 Films and Filmmakers
Addie and the Lightning Bugs (@alexanderjeffery)
Directed by Alexander Jeffery
In the damp heat of a southern summer, a young girl finds out that her family is moving to a new
city. As Addie hatches a plan to stay put, she seeks solace in the mysterious lightning bugs in
her backyard.

Bamber Bridge (@bamber_bridge)
Directed by Mark D. Bonner
During WW2 a young black servicemen stationed in Europe meets a longtime white pen pal in
the British Royal forces that ultimately ignites a race fueled fight between American MP’s and
black serviceman during the height of Jim Crow and race riots back in the states.

Betty Lou Had A Son (NONE)
Directed by David Long
A struggling musician is forced to care for his spirited mother suffering from early onset
Alzheimer’s disease.

Canary (@leforbusier)
Directed by Marion Forbes
Hazel is inspired to create a piece of art for the first time in a long time, but she finds the harder
she concentrates on her work the more unresolved grief over her last relationship gets in the
way.

Cosmic (@calvinonealjr)
Directed by Calvin O’Neal, Jr.
As Dez makes preparations for an anniversary dinner, his girlfriend’s past returns to ruin the
night.

The Crying Bull (@giomarch69)
Directed by Gio March
A depressed Spanish Matador decides to turn his life around after the dead of his controlling
Father.

The Cut (@the_cut_movie)
Directed by Camille Gladney
A mother and child grapple with growing pains when eighteen year-old Summer asks for a very
special graduation present.

Day of the Deb (@rachelgwhittle)
Directed by Rachel Whittle & Matthew Garvin
The looming apocalypse forces a broken-hearted man to come to terms with the woman who
left him.

Emmanuel 9 (@aaronlwms)
Directed by Aaron L. Williams
Henderson’s valiant efforts to create a better life for his daughter come to a head when he finds
himself face to face with an active shooter.

In the Closet (@finneganjcollins)
Directed by Finnegan Collins
When her ex is late and her date is early, Miranda experiences the perfect storm for an awkward
afternoon.

The Mover of Things (@helperwildbee)
Directed by Hannah Roark
Bouche loves to visit her grandmother’s house, where she’s allowed to move her “B-nana’s”
things around, shaping the reality they both inhabit.

Notes on the War (@notesonthewar)
Directed by Stephen Joshua Martin
Desperate to pay off old debts, Hoff finds himself working as a chicken farmer on a retired blues
guitarist’s farm. When the livelihood of the farm is threatened by a mysterious chicken virus, the
two men do everything they can to prevent the destruction of the flock by government forces.

Peeping Todd (@joshmunds)
Directed by Josh Munds
Todd loves doing one thing… peeping. When a late night peep session goes awry, his hopes of
peeping may soon be dashed if he doesn’t take matters into his own hands.

Please Scream Inside Your Heart (@jayamcsharma)
Directed by Jaya & Jacob McSharma
A doctor has to sit down with her boss after standing up for what she believes in.

Rising Dawn (@risingdawnfilm)
Directed by Monique Morton Derouselle
An insecure high school senior is challenged to step up to the plate and perform a
show-stopping baton solo to win the battle of the bands for her school.

Ruminant (@190productions)
Directed by Jeremy Enis
Following her mother’s death, Alexia — now alone, and more vulnerable than ever – will have to
face the dark secret of her small, insular community.

Strangers in Common (@ghostwrightmedia)
Directed by Carlos Jimenez
Two heartbroken strangers spend the night roleplaying as each other’s cheating spouses to
imagine how they met.

They Grow Up So Fast (@johnfbeach)
Directed by John Beach
When Brian meets Amy after a night out on the town, things move a little faster than he
anticipated.

Unicorn Poop (@elletigrey)
Directed by Lorna Street Dopson
A girl makes a deal with the monster in her closet.