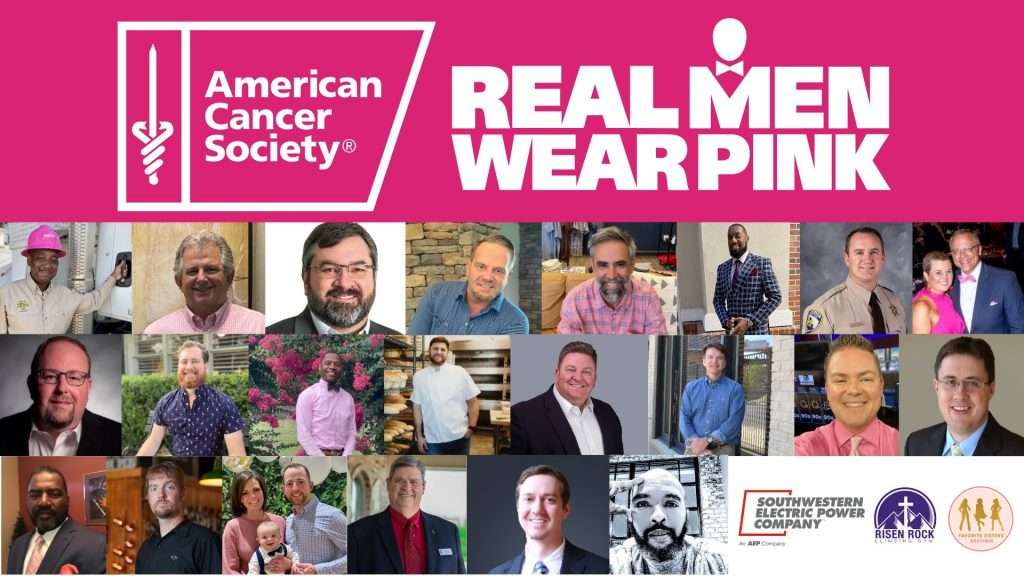 October marks National Breast Cancer Awareness Month and The American Cancer Society (ACS), the nation’s largest nonprofit source of cancer research funding, has teamed up with Ryan Serhant, CEO of real estate brokerage SERHANT, and Bravo TV’s Million Dollar Listing star, in the fight against breast cancer. As the national ambassador to the program, Serhant will be wearing pink every day in October, creating educational content and dedicating his popular social media channels to fundraising to fight breast cancer for the month of October.

Local leaders in Northwest Louisiana are stepping up and supporting the Real Men Wear Pink (RMWP) campaign. The campaign was designed to engage more male community leaders and influencers in the Society’s mission to eliminate breast cancer. Community leaders around the nation use the power of wearing pink to draw attention to the cause, events and social media to raise awareness and funds for the American Cancer Society’s breast cancer initiatives.

There are 23 leaders in our community that are committed to standing out in the fight against cancer. Many of the men are participating in memory or honor of a loved one that has battled cancer.

Tom Arceneaux, Blanchard Walker O’Quinn & Roberts, is participating in memory of his mother-in-law and his sister-in-law.

Everyone has their “why” and they are here to partner with our community as the ACS saves lives, celebrates lives, and leads the fight to a world without cancer.

Due to the COVID pandemic, 41% of Americans delayed medical care including their annual cancer screenings.  Even before the pandemic, only 63% of women were up to date on their annual mammograms. Studies showed that Black women are 40% more likely to die of breast cancer than White women. RMWP will raise vital funds for breast cancer research, advocacy, health equity and patient support.

ACS provides innovative research, patient services, health equity, and education around screenings and risk reduction. Since its inception, this annual program has raised more than $40 million towards the fight against breast cancer.

Paul Savage, Jr., who manages Shreveport’s Secrets, is among the men leading the fight against this awful disease. As a fellow cancer survivor, he understands deeply the impact a cure could have on so many. You can donate to the American Cancer Society’s mission through his Real Men Wear Pink fundraiser by clicking here.