ANECA partners with CADA to help those on path to recovery 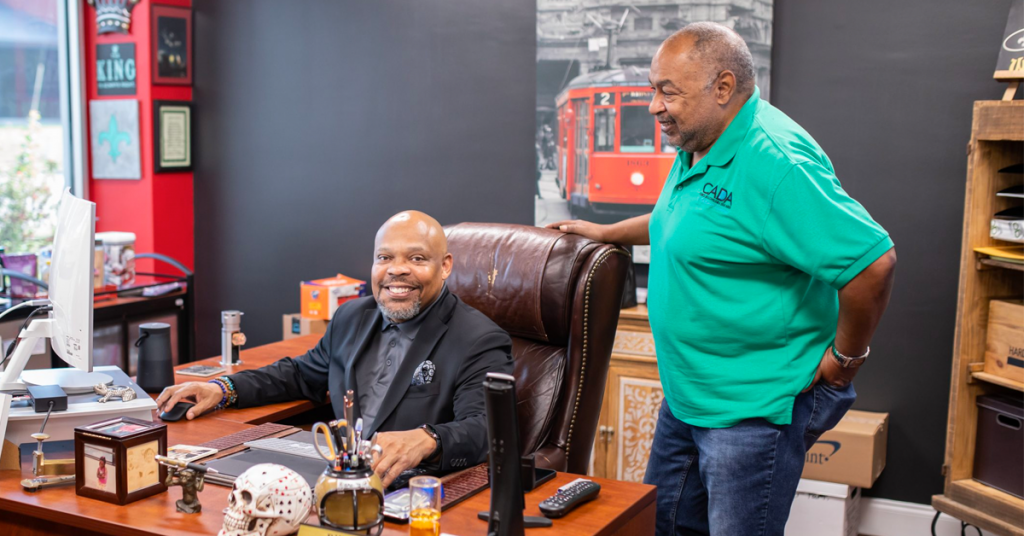 Bill Rose recently celebrated a big milestone: 34 years of sobriety. That also happens to be nearly how long Bill has been active in rehabilitation facilities. Six months into his recovery from drug and alcohol addiction, Bill began volunteering in drug treatment programs. At the time, he worked for a local oil company, but he also helped out at a hospital-based inpatient recovery program near where he lived in Louisiana. When Bill was laid off from his job in 1989, his life could have spiraled back to late nights out and high-risk activities; however, instead, Bill continued forward on his path of recovery.

That’s because Bill was connected with Dan Talley, the Executive Director of The Council on Alcoholism and Drug Abuse of Northwest Louisiana (CADA). Dan’s wife, Bonnie, worked at the hospital where Bill volunteered, and when she heard that Bill was out of work, she introduced the two to each other. One week later, Bill was a full-time CADA employee. “CADA embraced me and gave me a place to land,” said Bill. “They helped to mentor me, support my recovery, and keep me in a safe place, and my career kind of took off from there.”

CADA was established in 1958. Since then, the nonprofit private health organization has continuously provided substance abuse and addiction treatment services to Northwest Louisiana. Today, CADA offers 12 programs out of four facilities that serve Shreveport, Bossier, Many, and many rural areas across Louisiana, including at every horse racetrack in the state. The nonprofit prides itself on offering services to anyone, including adults and teens, regardless of their ability to pay. CADA is able to do this through a wide variety of payment options that include Medicaid, private insurance, and, in some cases, state funding.

According to Bill, CADA helped him get into counseling, and after five or six years, he left the nonprofit to pursue opportunities that he never would have had without Dan Talley’s guidance and CADA’s support. However, in 1998, when a management position opened up at CADA, Bill didn’t have to think twice about whether or not to apply. He got the job, returned to CADA, and Dan Talley became his boss. Bill’s been at CADA ever since.

Over the years, Bill has served a number of roles at CADA. He’s been a program manager of the nonprofit’s drug court program, helping clients to avoid jail time by coaching them through an intensive, long-term recovery path. Additionally, Bill was a program director at one of CADA’s detox centers, during which time he was also responsible for a 71-bed care facility. More recently, since early 2012, Bill has served as CADA’s Executive Director, leading a team of roughly 100, which includes full-time, part-time, and contracted employees.

According to Bill, although it wasn’t easy to transition away from counseling and programming, he felt like stepping in to serve as executive director was something he needed to do. “Dan Talley left such an impression on me,” Bill said. “For whatever reason, he took an interest in my recovery and taught me how to be a counselor, and when he died, I said that I was going to commit myself to doing whatever CADA needed me to do.”

Although these days Bill spends most of his time working with CADA’s accounting department, human resources staff members, and development team, he also gets to work closely with Susan Garcia, CADA’s Director of Client Relations and Engagement. Like Bill, and roughly half of CADA’s workforce, Susan is in recovery. However, when Susan first walked through CADA’s doors, she was wearing shackles. She completed CADA’s recovery program, applied for a cook job at the nonprofit, and steadily climbed the ranks to her current position. Susan played a vital role in CADA opening a location in Many, her rural hometown where she knew firsthand that there was a need for addiction recovery services. Today, Susan holds the honor of being Louisiana’s Peer Recovery Support Specialist of the Year.

“I still get chill bumps when I think about how Susan walked into our facility literally in shackles and now she’s in a position probably more than me to help people recover,” said Bill. “That story never gets old. That’s the cool part of being sober for 34 years: it’s to see the light come on in a person that’s broken, and their lives start progressing along in a manner that they didn’t even imagine.”

The Financial Piece of Recovery

Two years ago, Susan happened to meet Cyndi Phillips at a fundraiser event with a CADA alumni group. Cyndi is the Director of Community Development at ANECA Federal Credit Union, a Louisiana-based credit union that first opened in 1939. CNote invests Impact CashTM dollars in mission-driven and FDIC- and NCUA-insured credit union partners like ANECA, generating returns on institutional investors’ cash allocations while supporting financially underserved communities across the country.

Cyndi and Susan met for lunch to discuss how they might work together, and ever since, ANECA has been one of CADA’s most supportive community partners. According to Susan, the credit union participates in just about every event that CADA hosts, and Cyndi is a regular fixture at CADA’s open houses and weekly Friday graduations, at which the credit union supplies the caps and gowns. “ANECA is a joy to work with,” Susan said, “and Cyndi supports everything we do.”

Importantly, ANECA also offers CADA clients financial literacy classes, which include training on how to detect and avoid predatory lending. Additionally, ANECA helps to get CADA clients on the path to opening up checking and savings accounts, as well as improving their credit scores. These are vital services, considering that many of CADA’s clients don’t have a state-issued identification card or driver’s license and would otherwise be unable to open a bank account.

According to Bill, giving CADA’s clients the opportunity to take their cash and put it safely into an ANECA account is an important part of the recovery journey. “Money can be a trigger,” he said, “so for a big percentage of the folks that we treat, it’s not a good practice to keep money in your pocket. Bringing in a lending institution like ANECA has been beneficial for folks getting on their feet.”

That was the case for Susan. According to her, before she was sober, and even early into her recovery, she thought that having a bank account was out of reach. However, thankfully, she was given the opportunity to open an account: a seemingly small accomplishment that helped to propel her forward in her recovery. That’s because, as she described it, having a bank account boosted her self-esteem and made her feel like a human again.

“Addiction has a significant impact in every area of a person’s life, including banking,” said Bill. “When we’re able to help someone get that first checking or savings account, do you know what it does for their self-esteem and self-worth? I can’t put a dollar value to it. The financial piece is a big part of the puzzle of trying to get some stability in life, and it’s amazing to see how ANECA’s work plays a part in people’s recovery.”

Author Credit: This article was written by CNote and is shared here on Shreveport’s Secrets with their permission. Click here to view the article on their website.